Hola! Does the thought of learning the second most spoken language in the world make you want to flamenco dance your way to Spain? Why not apply for a student exchange program in Spain? 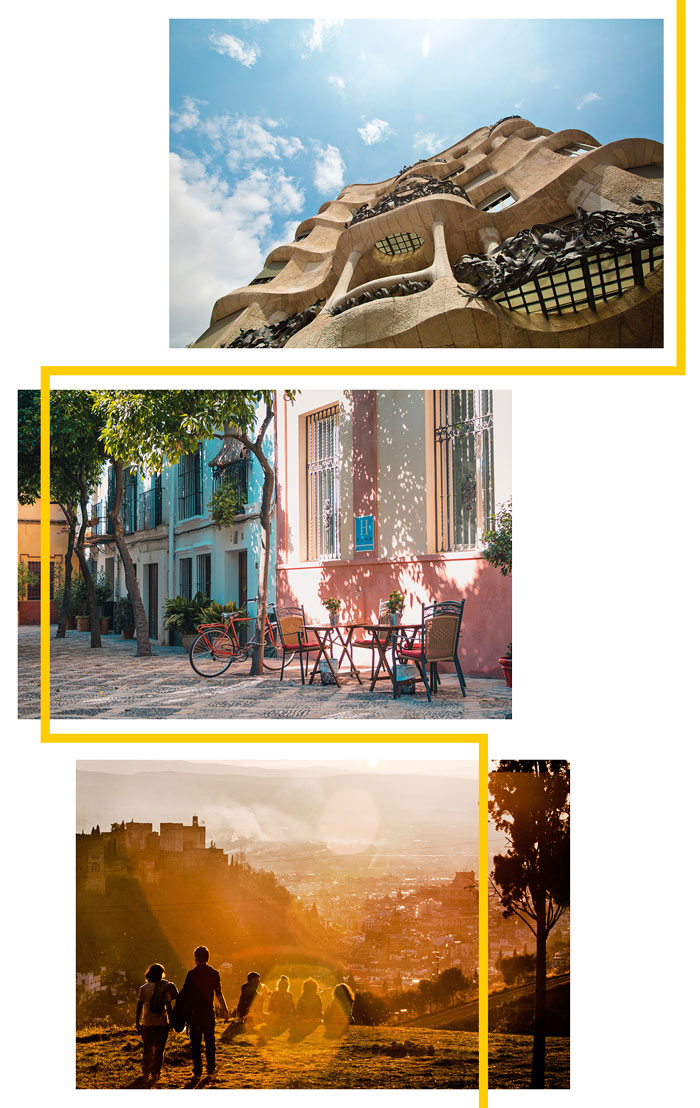 Why apply for a student exchange program in Spain?

In a student exchange program in Spain, you will discover a country full of charm and history. Spain is famous for Flamenco music and dance, bull-fights, fantastic beaches besides delicious tapas food.  However, Spain is also steeped in history and culture with some of the most beautiful cities and towns mixing historical monuments with futuristic architecture.

Above all, Spain has a diverse landscape with beautiful mountain ranges, wildly stunning cliffs, picturesque coves of the Mediterranean, tiny villages perched on hilltops as well as the beauty of coastal outcrops.

Spanish people possess a passion for life, expressed through their love of food, the music in their soul and their love of celebrating all the good things in life.

Spain is the third largest country in Europe with a population of around 45 million. Madrid is the capital and the country’s largest city, which is located in the centre of the country. Madrid is also Spain’s financial and commercial capital for hundreds of years.  Other major urban areas include Barcelona, Valencia, Seville, Bilbao and Malaga.

The various regions of Spain are quite diverse – with geographical, climatic and historical differences.  Many and varied cultures have gone into the making of Spain. It includes the Castilians, Catalonians, Lusitanians, Galicians, Basques, Romans, Arabs, Jews, and Romani (Gypsies). Consequently, this accounts for the varied cuisines, customs, and rich contributions to the world’s artistic heritage.

Whilst daily life in Spain is the same as in other Western countries, some important practices that are particular to the country still remain.  The most obvious is the organisation of the day and the scheduling of meals. Lunch, which is the main meal of the day, is eaten between 2:00 pm and 3:00 pm. Traditionally people would have the famous siesta – a nap after lunch – but, because most people now commute between home and work, this custom is in decline. Supper, a lighter meal, is also eaten late, between 9:00 pm and 10:00 pm, or even later during the hot summer months.

Spanish cooking varies greatly from region to region, linked to local products and traditions. The Valencia region is home to one of Spain’s most famous dishes, paella.  Paella is a savoury yellow rice dish with meat or seafood and vegetables.

From Andalusia comes gazpacho, a delicious cold soup made of tomatoes, garlic, and cucumber, while the cattle-producing region of Castile boasts succulent roasts and air-dried hams.

Tapas are also associated with Spain and is the custom of having a small snack before a meal.  Tapas usually consist of prepared dishes, many of which are quite elaborate and are often smaller versions of main-course dishes.

There are hundreds of different tapas, but a few typical ones are mushrooms in garlic sauce, marinated seafood, Spanish omelette and octopus in paprika sauce.

Spain’s network of train and bus services is one of the best in Europe.

Madrid and Barcelona have extensive bus and metro systems, however, all cities and provincial capitals have reasonable bus networks.

Compared to other countries in Europe, travel by public transport is relatively cheap in Spain.

The climate of Spain varies greatly from region to region.

The northern coastal regions are cool and humid with an average annual temperature of 14 degrees celcius.

The Central plateau is cold in winter and hot in the summer. Madrid has a winter average of about 8deg celcius and a summer average of 23 deg celcius.

In Andalucia and the Levante, the climate is temperate except in summer, when temperatures can reach above 40deg celcius in the shade!